The original bathroom lighting was a chrome, 2 bulb fixture that wasn’t going to work in the final remodel (btw this photo shows the old wallpaper and mirror – yuck!):

Which I had planned on replacing with a $169 fixture from LampUSA, but money was tight so I kept looking and found this $25 Craigslist find: 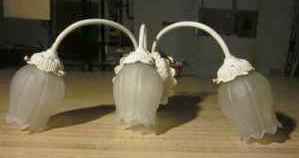 The tulip light matches the theme of the x-ray photograph artwork in the bathroom. After a fresh coat of Krylon spraypaint – Satin Blossom White – (Westlake Hardware) it really looked great!

Money is a BIG consideration with all the house remodeling… and it turns out that it looks great so all worked out in the end even though it was a nightmare trying to get the guy who was selling it to actually SELL IT!

Here’s the story: two weeks ago I saw the light and thought it might work. Ran it by hubby and he liked it so emailed the person with “is it still available? Can pick up anytime.” Got a “yeah, when do you want to see it?” Gave him some different times but mostly I’m open anytime except the night I go to school.

Didn’t hear back for a week. Since I still saw the ad, emailed again. He emailed back that he was out of town and would get back with me when he returned. Never heard back but the ad was posted AGAIN! Had husband email him from a separate email and I got an email saying “he had another buyer and was I serious?” – this after me sending my phone number 3x to this guy and asking for a time to meet or a phone number I could call him! What a moron!

Husband finally got him to commit and when he arrived turns out they live in a la-de-da gated community in a rich house and he was selling this stuff for the in-laws. Bitterly complained to husband that the entire $25 was going to in-laws despite all the inconvenience to him!

This is why Craigslist can be soooo irritating!