You probably want to read about some amazing deal I found: like a fantasy $10 dresser I redid and sold for $500. Personally, the reality is that those deals are getting harder and harder to find – if not impossible.

All the popularity of painting furniture on Pinterest, Facebook and in junk/vintage booth stores has made it rare to find “deals” anymore. Even average furniture has gone up in price on Craigslist and so I am not here to tout bargains. I actually am a bit tired of having to buy something only to spend weekends getting it back into some sort of shape for my home – it’s one reason the blog has not been so busy this last year as I’ve had re-decorating burnout…

I did find two matching lamps for the Living Room – they are the Mercury Glass style (I did try the Mercury glass spraypaint featured in many Pinterest pins and the reality is that it was crap and not at all professional in end product).

They would have cost me twice as much if bought at Pier One and these are about the same quality as Pier One lamps. But a steal? No. 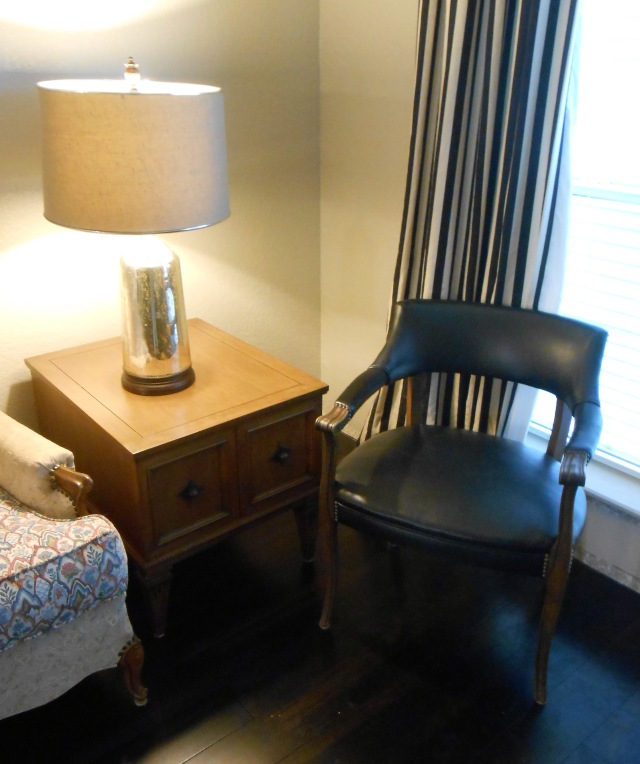 I also found two matching end tables for the Living Room on Craigslist. Again, no real bargain at $120 for two. However, these are high quality pieces, nothing wrong or damaged with them, with hardware I won’t have to replace. It’s also a huge problem trying to find two matching tables – generally you find an end table with a matching coffee table (not what I wanted as it didn’t work with the room’s configuration).

I will be painting them as soon as I replace the couch and chairs. While the black and white striped curtains, the black chair, wall color and floor will remain the same, the sofa and the chairs will be changed. I may go with a gray couch and patterned upholstered chairs or gray chairs and a colorful couch. Not sure.

The chair here? Craigslist for $80. Why so high? Because it’s real leather not fake vinyl. The springs are excellent and while I might put a wax on the wood, I’m not repainting it. It’s pretty much ready to go.

Nothing wrong with dumpster diving or finding a broken dresser to fix up – but even broken things are Craigslist are going for twice what they did two years ago (I saw a dresser missing two drawers priced at $100! Really? and the ad stated – “redo like on Pinterest”).

On the bright side – it means the economy is improving. The downside is that the days of scooping up treasures next for nothing is pretty much gone.