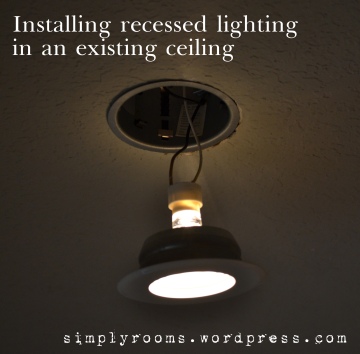 We have a large family room which is one of those awkward and bland rooms that is a decorating problem child. One of it’s major problems is that it’s often too dark and needs even illumination, so the first major project for this room, working from the ceiling down, is installing recessed ceiling lights.

Before you begin it’s easier to paint the ceiling vs. doing it after installing the lights and future molding. Since the project will have white ceiling molding we went with matching ceiling and wall paint (Valspar’s allen + roth Rock ar720 from Lowes). This color is being used throughout the downstairs to make the space look larger (vs. using different colors in each room).

TIP: if using molding, the more contrast between wall and molding colors the better your end project will look.

Before you begin this type of project, grid it on paper and than check stud locations as well as electrical. We planned on pulling the power for the lights from the ceiling fan which would mean the future replacement fan would have no light. This made it a pretty easy project, electrically speaking.

On our plan here black lines is where molding will be placed; red lines show how the electricity was run.

In our room, it turns out the ceiling fan was not centrally located, thus measurements had to be adjusted. Depending on the age of your house you may find some surprises like this too.

When choosing your lights, consider: how much room is in your ceiling; the amount of light you want; the type of light; how big a diameter the exposed light ring you want; how tall the can unit for the interior ceiling space; and if it will be on a dimmer (some lights don’t dim).

We needed a low profile canister light so it could fit in within the existing ceiling structure which had no attic access. The light we chose came from Lowes.

We had a central ceiling fan that had power for a light and a fan. The first thing we did was remove the old fan and from the electric for the fan light, and ran a line of electricity through the ceiling in a grid pattern. The holes we made to run the electrical line will be covered with future molding. 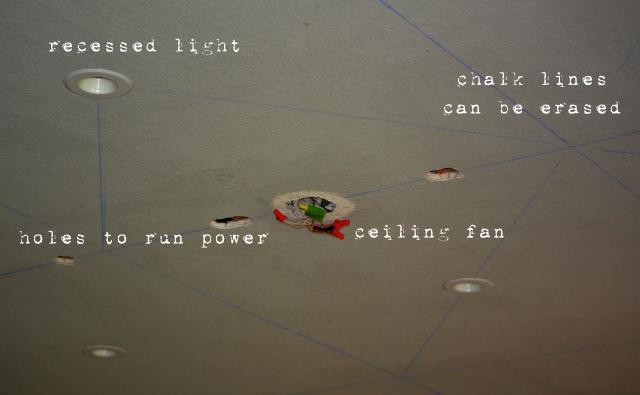 The 12 box grid we marked out with a line of blue chalk line. You can tap in a headed nail on one end and run the line from it to the other side to easily snap the line. When the project is done, a brush wipes off the chalk line. 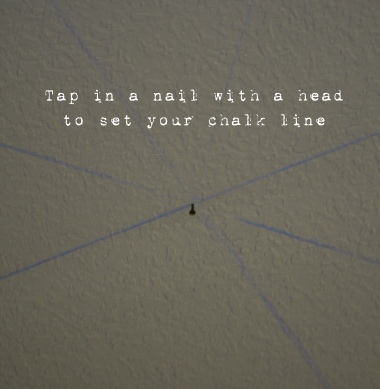 Each of the smaller squares will have a centered light. Make two diagonal chalk lines from corner to corner to make an X in each box. The center cross X will be the location of the recessed can unit. 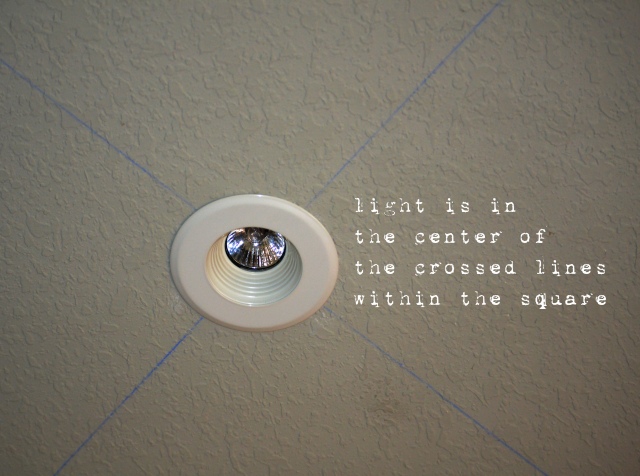 You can use a “hole saw bit” that attaches to your power drill to cut out a circle pattern in drywall. This punches out the circle smooth and easy where you can insert your can light. It also helps as access to run your electric without making too many unnecessary holes. 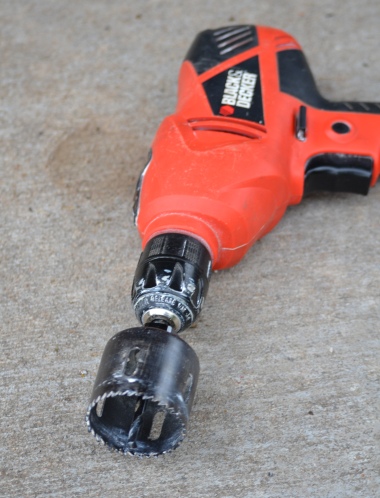 Most of the electrical wire was easily tucked between structural interior beams (behind the drywall) and the fiberglass battings. However, we did do a half inch notch in four beams at four different locations. If you do that be extremely careful that you do not impact the structural integrity of the beams. If in doubt, ask an expert before proceeding!

Be sure to cut the power from the main box before you wire to the live line. Our 12 recessed lights used Halogen light bulbs and wired to a wall mounted, dimmer switch that we used to replace the old on-off switch for the fan light. When selecting a switch make sure it is rated for the amount of power you plan on hooking it too.

This project takes a moderate level of knowledge about wiring and electricity. However, if you know enough to wire a ceiling fan you probably know enough to do this project. 🙂 I will be doing better photos of the entire room once the project is complete.

The smaller fixture units are more classy/trendy than the old and larger can lights. Best of all, being on a dimmer we have control – make it bright for visitors or dim for the big movie night.